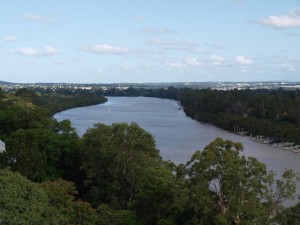 “Toowong” is thought to have been adapted by the European settlers from the Aboriginal, “Tu-wong“, the word used to describe the river bend near the Indooroopilly bridge.

The Aboriginals had occupied Toowong for around 30,000 years prior to European settlement.   From around 6,000 years ago Moreton Bay and the Brisbane River took on their modern form.  Due to the rich collective knowledge of the Aboriginal owners, there were reportedly 140 species of vegetable foods and in excess of 50 marine, river and land animals used to feed the population.

When John Oxley surveyed the Brisbane River in 1823 he recorded seeing a group of Aboriginals near the River at what is now called “Toowong” and described them as “about the strongest and best made muscular men I have seen in any country”.  Around the same time one of Oxley’s men shot and fatally wounded an Aboriginal man because of a disagreement or perhaps miscommunication over the ownership of a hat.  This created much confusion and sorrow amongst the Aboriginals and hence much conflict and retribution ensued.